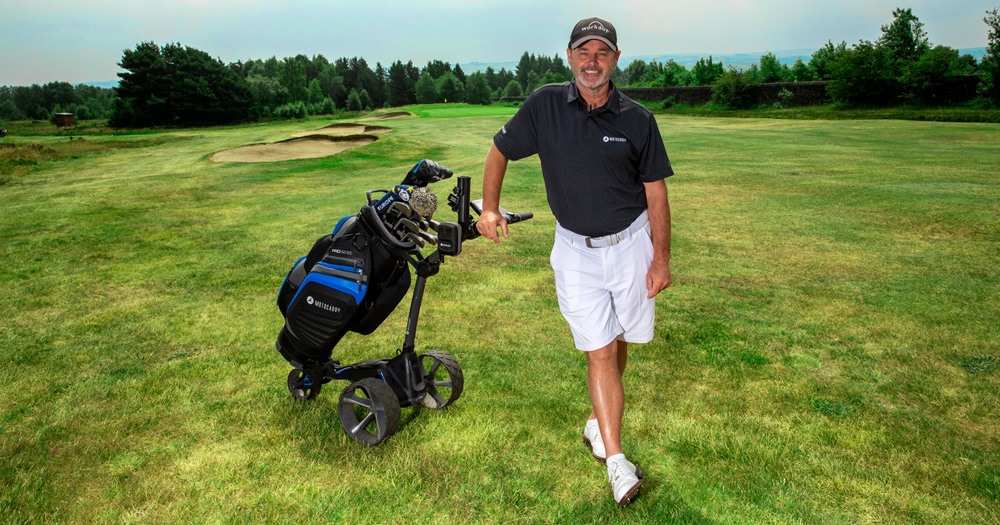 High profile Tour caddie Billy Foster has extended his role as a global brand ambassador for leading golf trolley brand Motocaddy to promote its growing range of trolleys, bags and rangefinder products in 2022.

It follows a successful start to the partnership in 2021, when Billy wore the distinctive Motocaddy branding on his sleeves at The Open Championship at Royal St. George’s while carrying the bag for Matt Fitzpatrick. He then continued to represent the brand at leading tournaments across the world along with fulfilling a series of media duties.

“I’m thrilled to be partnering with Motocaddy again this year, as it’s a great company with great people and they create products with features that genuinely help golfers play better and have more fun,” said Billy, who begins his 40th year on Tour at the WM Phoenix Open on the PGA Tour next week. “I’ve been around a lot of Pro-Ams over the years and believe me, most club golfers could do with the help that the latest Motocaddy trolley or laser can give them,” added Billy, who’ll be dressed in Motocaddy branded attire for at least 28 Tour events this year.

“We're delighted to have Billy back on-board and to have him represent Motocaddy on and off the course,” said Marketing Director Oliver Churcher. “Inconspicuous on the fairways alongside one of the world’s best players, it means that Motocaddy branding will be seen at all-four Majors this year, plus other big events on both sides of the Atlantic that offer us global exposure.

“Billy loves Motocaddy products and he continues to use his M5 GPS DHC trolley when playing on the hilly Bingley St Ives Golf Club course back home in Yorkshire. He also uses our PRO 3000 Laser Rangefinder to make his game a lot easier than during his day job in working out the perfect yardages! The partnership with Billy is the perfect fit and we’re looking forward to another successful year with him,” he added.

Since starting his caddying career in 1981, Billy has worked with many of the game’s greatest players, including Seve Ballesteros, Tiger Woods, Lee Westwood, Sergio Garcia, Thomas Bjorn and Darren Clarke. He has also been involved in 15 Ryder Cup matches and 29 Masters Tournaments, while playing a significant role in a total of 46 Tour victories - the most recent coming at the Andalucia Masters at Valderrama, Spain last October.

Talking about his M5 GPS DHC trolley, Billy said: “It’s absolutely fantastic. When I’m out on Tour my wife uses it, so it’s getting plenty of miles in the tank. She loves it and the features included as much as I do and it really is amazing how different you feel after a round when using an electric trolley, much more energy and the scorecard usually looks better too!”